“I have nothing to offer but mud, toil, and tears” I should say, paraphrasing Winston Churchill’s famous phrase from his first speech as Prime Minister to the House of Commons, when talking about Group B, the pinnacle of the World Rally Championship during the 80s. These weapons were in fact technological monsters destined to leave an indelible mark full of emotions and, unfortunately, dramas too.

The recent sale of Artcurial called “Parisienne” confirmed that these dangerous, high performance cars are currently the coolest thing on the market. 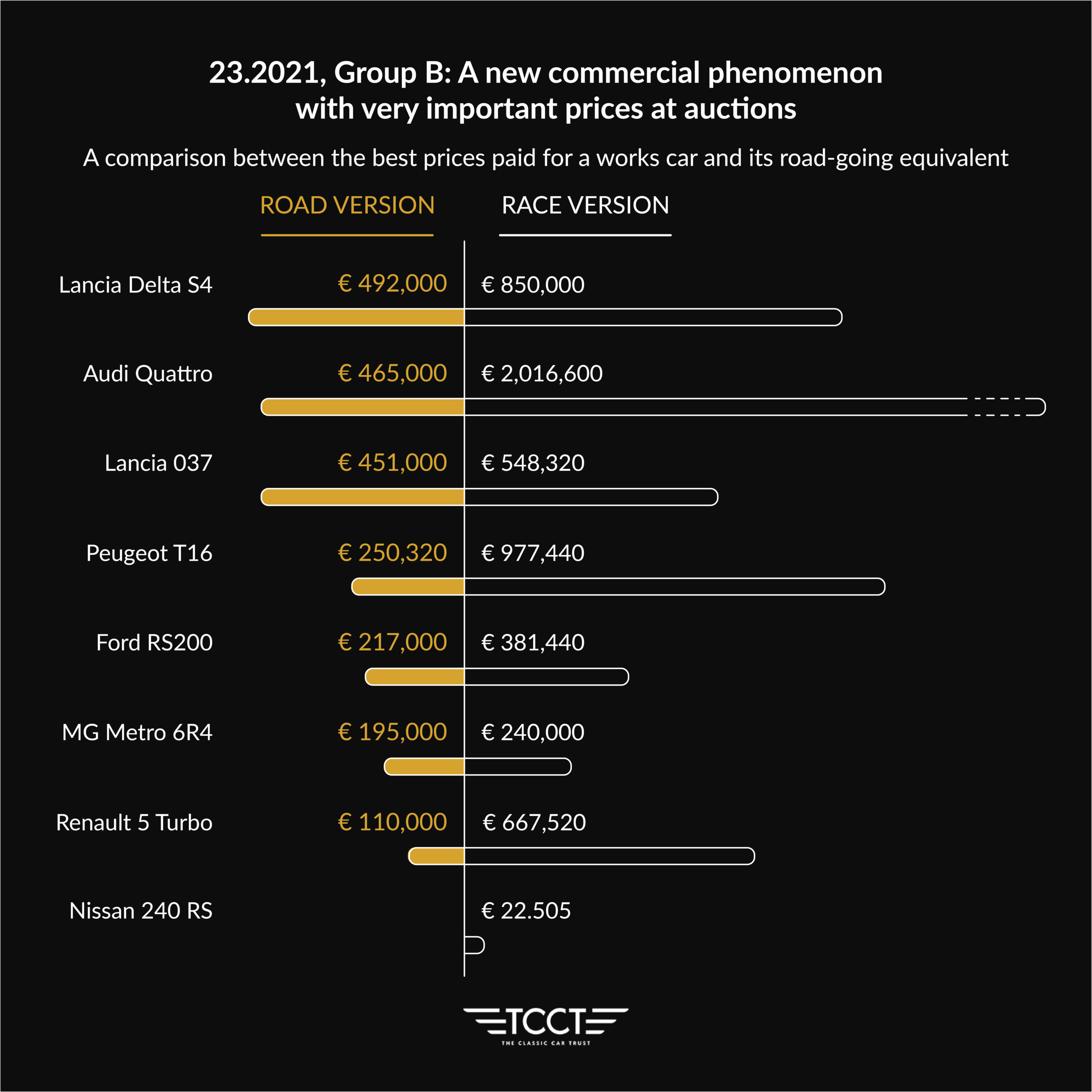 History and pedigree make all the difference with racing cars and, thanks to the regulations that required manufacturers to build road-going versions (it was impossible to reach the minimum production run of 200 units without producing a road model), we have proof that even the “street” versions are currently objects of desire.

For the Audi Quattro Sport (or SWB) the right train passed between 2013 and 2015. Until that year you could take home a beautiful road-going example for €100-140,000 but just two years later the prices had flown to over €350,000. The good news is that they then settled down at around €400,000. The bad news is that with a competition example changing hands for €2,016,600 at the February auction of Artcurial, a figure that doubled the minimum estimate of €1m-€1.3, I’m fairly positive that the road-going versions will follow suit and I would not be surprised if they broke through the €500,000 barrier the next time one comes onto the market.

Remaining in France, although very few remember the Renault 5 Turbo as a contender in the Group B category, it was present and raced even though its smaller displacement and power never allowed it to worry the competition. The same doesn’t apply when collectors look at it; because to take home the model driven by Carlos Sainz, someone a few days ago was willing to write a cheque for €667,520. Here too, a pretty substantial jump compared to a few years ago when they “sailed” around the €200,000 mark. How much I wish I had taken away the model driven by Jean Ragnotti at the Tour de Corse in 1986 for €195,500. And that was only three years ago. If we’re looking at road-going models, the situation is considerably more interesting because the older Turbo 1s are placed around the €110,000 mark and roughly €20-25,000 less than the younger Turbo 2. However, it’s worth remembering that these aren’t considered genuine Group B cars. In fact, they are the least powerful of the alternatives on the playing field and we should point out that having been conceived as a Group 4 car, they do not have the “technical nobility” of the competition.

The Ford RS200 was the pinnacle of the American giant’s efforts to successfully compete in Group B rallies and 20 years later the car could still claim the fastest 0-60 mph time. Perhaps for this very reason, it has never been cheap: in 2005 an Evolution model changed hands for €86,000 but the current record, set in 2017, is $550,000 (€454,000). If we consider the less powerful “basic” version (258hp against the 600-odd horses produced by the Evo) we can still take one home for the price of a new supercar. Twelve months ago, an example with just 1,195 miles on the clock from new changed hands for €217,000. By comparison, the racing version sold by Artcurial for €381,440 seems like a bargain, especially considering it was an official ex-works team car that participated in the 1986 Swedish Rally.

You now need almost €250,000 for an MG Metro 6R4, better known as Group B’s “ugly duckling”: at Artcurial, an example with a minor sporting history changed hands for €244,360 while an ex-official works example that claimed victory at the Rallye San Remo amongst its many trophies received a maximum offer of approximately €450,000 a few months ago but it went unsold as it did not exceed its reserve price. Clearly sellers are aiming higher. For the road version, the numbers are more reasonable, but it has to be said that the latest sale appeared a year and a half ago. In August 2019 a 2,100-mile model was sold for €115,000, and a few months earlier in January, another 6R4 received an offer of €196,000 but that one had just 175 miles on the clock from new. It’s been 15 years, but it feels like an eternity; at the time with €30,000 you could take home a road version, twice as much for a Group B.

In fact, there are still some Group B cars in existence but they are very rare and very few come to the auctions. For now, at least: given the tailwind, it might be worthwhile sharpening your sights and attempting to land yourself a bargain…

The first one that comes to mind could be the Citroen BX 4TC; designed to compete in the highest category, just 86 were produced by Heuliez, too few for it to be homologated for competitions. There’s just the road-going version left: a 2.1 litre turbocharged engine producing 200bhp might not match the prestige of its illustrious rivals but it’s jam packed with fun. One example changed hands in August 2019 for €50,600 and in the previous three years just as many have been sold (all in France) for prices ranging between €58,000 and €62,000.

The Opel Manta 400 is yet another low-cost alternative: in July 2020, a racing version was sold for €83,440. Unlike the BX, the Manta (like the previous Ascona 400) was homologated to compete in Group B but as it was rear-wheel drive and produced just 240bhp, it never really got anywhere close to the leaders. Of course, it would be amazing to get your hands on one of the two 4WD prototypes produced (although they never participated in any race), but rumour has it they were reconverted to rear-wheel drive a long time ago and their whereabouts are unknown.

The last of the alternatives could be the Nissan 240RS. Undoubtedly the curiosity of this model was thanks to the coefficients dedicated to normally-aspirated engines which meant it could install a larger one: In this case, were talking about a 2,340cc 265bhp engine, definitely not bad for a car that weighs just 970kg. If it’s possible, this model seems even rarer and harder to find than the others – in fact the last one appeared at an auction in 2017, when a racing example remained unsold against an estimate of €100-120,000. Remember though, that the same example had changed hands just three years earlier for just €22,505, or one fifth. The hunting season is now officially open…